Picking up from Part 2 of this series where we left off having replicated the data a minimum of nine times, we will continue to identify additional data replication stages as we trace through the data processes outlined in “Build a Schema-On-Read Analytics Pipeline Using Amazon Athena”, by Ujjwal Ratan, Sep. 29, 2017, on the AWS Big Data Blog, https://aws.amazon.com/blogs/big-data/build-a-schema-on-read-analytics-pipeline-using-amazon-athena/  (Ratan, 2017).

Keep in mind that my series of articles is following the breakdown of the AWS Schema-on-Read analytics pipeline with a focus on data movement and replication to answer the question, “Does the size of the data now being delivered to the business make a compelling argument that the data should not be moved around as much?”  I believe one of our goals should be to reduce the number of times volumes of data are moved around or replicated.

Finally, with the data separated into a number of different results files (.csv) located in a separate S3 bucket, the data is ready to be read into the Athena “table” for reporting.  Let’s hope that every one of the three query outputs are identical in format and layout, otherwise you’re building three different reporting definitions, one for each layout. 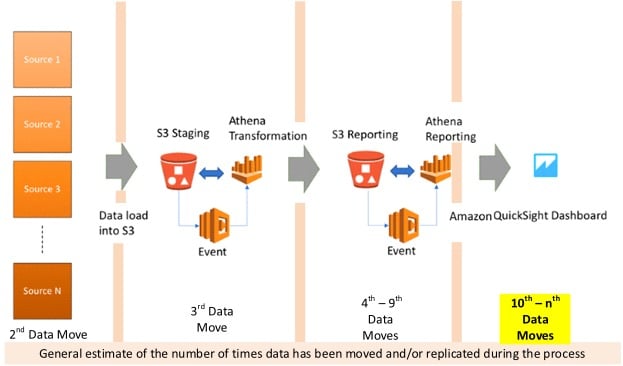 Last but not least, the author addresses incremental data loads.  Really? … at the end of the process you’re going to figure out how to maintain the data for operational continuity?  Shouldn’t that have been planned at Step 1?  Maybe that’s something the architect should have considered in his initial design, but apparently incremental loads/operational continuity didn’t make the cut for the set of “important criteria” that must be considered when designing an analytical platform …

So, because the incremental or ongoing ingest process wasn’t planned upfront, and therefore, is not pattern-based or repeatable; new ETL processes must be written to ingest incremental data and refresh all the data as it moves up the chain to the reporting tables.  That doesn’t strike me as a sustainable process, and why are those incremental processes so different from the initial load processes that they have to be separate?

Why are we doing this? Doesn’t virtualization (creating a view) do the same thing without replicating the data?  How is this at all sustainable or an improvement?

# of Data Movements in AWS – exponential!!!

To save his bacon (so to speak), the author adds this statement in his conclusion, “However, it’s important to note that a schema-on-read analytical pipeline may not be the answer for all use cases.  Carefully consider the choices between schema-on-read and schema-on-write.” (Ratan, 2017)

Seriously … you think so?  His article should have started with these statements.

(1) systems have defined data structures (like the one that generated all of the .csv files in the first place!), or

(2) utilize target queries that mostly involve joins across normalized tables (umm, like probably 90% of all data warehouses), or

(3) you are using fixed dashboards with little to no changes (why is this even relevant?)

… then a schema-on-write is probably a better solution for query performance!!!

Now, all sarcasm aside, if Mr. Ratan had used data that was originally sourced in a JSON format (meaning, it was not generated from a structured database and output in JSON format), and had built his example around such a data set, I might have been less critical because those are challenging dilemmas that the industry is facing (unless, of course, you’re on Snowflake DB).  But he didn’t.

My challenges to the concepts in Mr. Ratan’s article are quite simple.

The analogy the author starts with is based on the healthcare industry.  A dangerous industry to select as a subject area (I would think) due to the issues of managing data privacy, governance, security, and auditability inherent in the realm of healthcare data.  Here are the questions that I believe IT managers and C-level executives should be asking themselves when considering “Data Lake” technologies.

Notwithstanding the fact that the author’s particular set of selected data did not appear to contain Protected Health Information (PHI), here goes …

Admittedly, I’m not an AWS guru … but in some AWS environments teams are still struggling with what it takes to secure data appropriately, grant the right level of permissions (to tools, individuals, and discrete data elements), and still keep costs down.

In my final article, Part 4 of this series, I will talk about what I believe is a solid technical approach through which to implement a “Data Lake” that will provide the true business value that companies are hoping to receive.